What is Your Favorite Book?

What is Your Favorite Book? 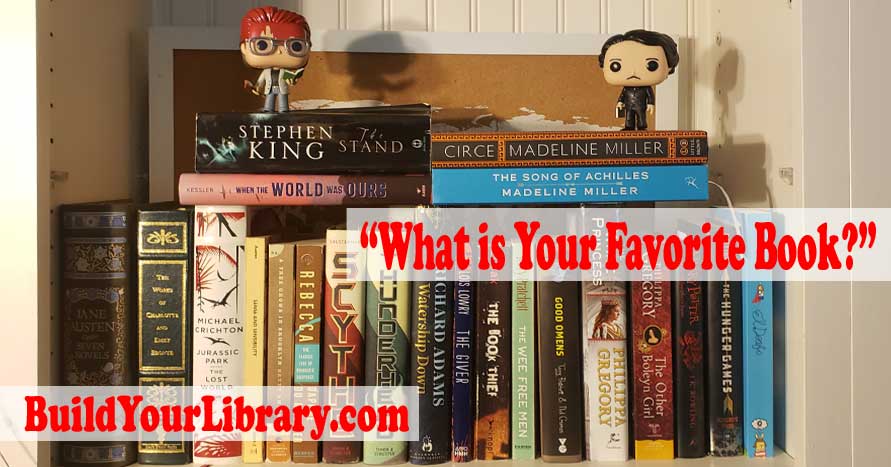 Last week, I posed the question “What is your favorite book?” as one of the entries for the Week 4 Anniversary Contest. Of course, it can be difficult to narrow down one specific favorite. But this was just for fun and I wanted to share the answers with you for your reading pleasure. Some form of “I can’t pick one!” was selected 12 times. And we did have a few people list more than one book, which we allowed in the results parsing below.

I have consolidated all of the duplicate answers and then divided them up by the most popular author across all selections. This is in no way the end all, be all FAVORITE BOOKS EVER list, but perhaps you may find some interesting titles to add to your TBR stack. I certainly did!

I also added a personal rating for the books that I have read and liked. RF is a book I have read, and consider one of my many favorites. RR is for books I have read and would recommend. R is a book I have read, DNF is for books I started to read but did not (and will not)  finish. O means I own the book, but have not yet read it, but intend to. NO designates “no opinion” as I have either not heard of it before, or simply do not personally have a strong opinion on reading it or not. I means I do not own it yet, but am interested in reading it at some point. NI means I have heard of it, but am not interested in reading it,

probably due to it not being one of my preferred genres. MWB, sigh… This is one of the extremely rare, the “movie was better.” 99.9% of the time I am a “the book was better” girl… but The Princess Bride movie is perfection, but the book was just fine… 🙂

If I had to try to narrow down a top favorite, I would cheat and name both Watership Down by Richard Adams and The Book Thief by Marcus Zusak, in no particular order (neither chosen in the poll). My husband would second the pick of Jurassic Park by Michael Creighton. Sarah’s top pick is Vicious by V.E. Schwab (also not chosen), Robbie picked Thunderhead by Neal Shusterman (Scythe was chosen), Riley seconds The Martian by Andy Weir, and Regina selected El Deafo by Cece Bell (not chosen).

Books by the following authors were chosen the most often:

These authors had two picks:

There were a couple of authors that surprised me by only being picked once: Neal Shusterman, Terry Pratchett, and N.K. Jemisin.

Or not chosen at all: George R.R. Martin, Edgar Allan Poe, and Shakespeare.

Single Book Selections (all the rest)

If you are looking for any TBR inspiration, the following LONG list is the rest of the books selected once, along with my quick rating:

A Christmas Memory by Truman Capote (NO), A Discovery of Witches by Debra Harkness (DNF), A Tree Grows in Brooklyn by Betty Smith (O), A Court of Thorns and Roses by Sarah J. Maas (NI), Alice in Wonderland by Louis Carroll (RR), American Gods by Neil Gaiman (RR), And Then There Were None by Agatha Christie (R), Anna Karenina by Leo Tolstoy (DNF), Anxious People by Fredrik Backman (O), Baltimore Blues by Laura Lippman (NO),  Black Beauty by Anna Sewell (NI), Blindness by Jose Saramago (NO), Cat’s Cradle by Kurt Vonnegut (I), Charlotte’s Web by E.B. White (RF), Circe by Madeline Miller (RF), Clean Sweep by Ilona Andrews (NO), Cress by Marissa Meyer (NI)

Nightingale by Kristen Hanna (DNF), One Crazy Summer by Rita Williams-Garcia (RR), Penderwick Series by Jeanne Birdsall (RR), Percy Jackson by Rick Riordan (RR), Play It As It Lays by Joan Didion (NO), Ramayana by Valmiki (I), Rebecca by Daphne du Maurier (RR), Scythe by Neal Shusterman (RF), Skills by Charles Dowding (NO), Starfish by Lisa Fipps (I), Strange the Dreamer by Laini Taylor (NI), Tao Te Ching by Lao Tzu (NO), The Absolutely True Diary of a Part Time Indian by Sherman Alexie (RR), The Awakening by Kate Chopin (NO), The Diviners by Libba Bray (O), Dragon Prince by Melanie Rawn (NO)

The End of the Affair by Graham Greene (NO), The Fault in our Stars by John Green (R), The Giver by Lois Lowery (RF), The Handmaid’s Tale by Margaret Atwood (RR), The Heavenly Horse From the Outermost West by Mary Stanton (NO), The House in the Cerulean Sea by T.J. Klune (RF), The House of Night by P.C. Cast, Kristen Cast (NI), The Kite Runner by Khaled Hosseini (RR), The Lark & The Wren by Mercedes Lackey (NO), The Little Princess by Francis Hodgson Burnett (RR), The Long Way to a Small Angry Planet by Becky Chambers (RF)

The Lorax by Dr. Seuss (RR), The Lord of the Rings by J.R.R. Tolkien (RF), The Martian by Andy Weir (RF), The Master and Margarita by Mikhail Bulgakov (NO), The Obelisk Gate by N.K. Jemisin (O), The Odyssey by Homer (RR), The Outsiders by S.E. Hinton (R, but I actually preferred the retelling: Bad Girls Never Say Die by Jennifer Mathieu) The Pellinor series by Alison Croggon (NO), The Personal Librarian by Heather Terrell, Victoria Christopher Murray (I), The Power Broker by Robert Caro (NO), The Power of Positive Thinking by Norman Vincent Peale (NI), Mrs. Frisby and the Rats of Nimh by Robert C. O’Brien (RR), The Shadow of the Wind by Carlos Ruiz Zafon (O), The Shining by Stephen King (RR)

The Way of Kings by Brandon Sanderson (NI), The White Queen by Phillipa Gregory (RR), Things Fall Apart by Chinua Achebe (O), This Perfect Day by Ira Levin (NO), To Kill a Mockingbird by Harper Lee (RF), To Say Nothing of the Dog by Connie Willis (I), Treasure Island by Robert Louis Stevenson (NO), Twilight Series by Stephanie Myers (NI), Wee Free Men by Terry Pratchett (O), The Westing Game by Ellen Raskin (RR), Wheel of Time Series by Robert Jordan (NI, but will continue to watch the show),  When the World Was Ours by Liz Kessler (RF), Where the Red Fern Grows by Wilson Rauls (R), Wicked by Gregory Maguire (DNF), and Wizard of Oz by L. Frank Baum (RR).

Is there a book listed above that you agree with? Was one of your favorite books not listed at all? Let us know in the comments!

For more recommendations of some of my favorite history and historical fiction books, also check out my favorites at History Book By Book.

Disclosure: This list contains affiliate links, meaning I get a small commission if you make a purchase through my links, at no cost to you.