The 23rd day of April was William Shakespeare’s day of birth (1564), which consequentially is the day that gent hath kicked thy bucket 52 years anon in 1616. It hath eke been dubbed “Talk Like Shakespeare Day.” In the present day’s blog posteth, I has’t ev’rything thee needeth to knoweth in ‘rd’r to bray out! 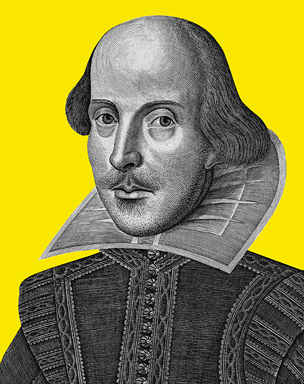 “All the world’s a stage, and all the men and women merely players. They have their exits and their entrances; And one man in his time plays many parts.”

Fun fact, William Shakespeare was not your Great, Great… Great Grandfather. He has no direct descendants alive today. When Shakespeare was 18, he married 26-year-old Anne Hathaway. Six months later, their first daughter Susanna was born in 1582. A few years later, twins Judith and Hamnet were born in 1585. Hamnet died at 11-years-old in 1596. In 1608, Susanna had a daughter Elizabeth, but she ended up with no children after two marriages. Judith also married and had three sons, but all died before they married. Thus ending any direct lineage claims anyone may have.

At best, you could descend from one of his siblings. His parents John Shakespeare and Mary Arden had eight children in total. But this would only make you distant cousins, many, many times removed. Such a tragedy.

It’s amazing that we can know so little about what many consider to be the world’s greatest author. There are very few actual documents related to Shakespeare’s life, leaving much to speculation. But what we do have is an amazing collection of plays and sonnets filled with rich language, much of which the author invented!

It is widely known that, including collaborations, Shakespeare wrote approximately 39 plays, 154 sonnets, two long narrative poems, and several other verses during his lifetime. Unlike now, grammar, spelling, and pronunciation were far less standardized back then. Even Shakespeare himself spelled his name differently depending on the signature, often simply using “Willm Shakp!”

“What’s in a name? A rose by any name would smell as sweet.”

The English language was significantly shaped by Shakespeare’s works. It is estimated that he introduced thousands of words into the English language. “Auspicious,” “baseless,” “bedazzled,” “castigate,” “dwindle,” “sanctimonious,” I could quite literally list a “multitudinous” amount of words.

He also coined many phrases still widely used today, such as “with bated breath,” “heart of gold,” “seen better days,” “wild goose chase,” “faint-hearted,” “a foregone conclusion,” “break the ice,” “it’s Greek to me,”  “love is blind,” even “Knock, knock! Who’s there?”

You probably already “talk like Shakespeare” more often than you think.

Introducing Shakespeare To Thy Children

Shakespeare might seem intimidating on the surface. Let’s be honest, his plays are rarely made interesting in high school English classes. Most of us had to plod through the difficult language without being able to truly enjoy the story. So you might hesitate to introduce his works to your children.

But don’t! Shakespeare is for everyone – his plays are great stories and yes, even your 6-year-old can get in on the fun! I’m going to lay out a simple three-step plan for enjoying Shakespeare with your family.

Read a retelling. There are many storybook versions of Shakespeare available. I really like Shakespeare Retold by Edith Nesbit and Tales from Shakespeare by Marcia Williams. Both books are well written and filled with colorful illustrations. They give you the plot of the story in an easy-to-understand format.

Once you understand the storyline you are ready to delve into the full play. If possible, I like to try and watch the play first as that is how they were meant to be consumed.  If you are lucky enough to find a local theater troupe performing Shakespeare, please take full advantage! There’s nothing quite like seeing the Bard’s plays performed on stage as they were intended! There is a “Shakespeare in the Park” production that performs several works for free during the summer months near us in a neighboring city. We don’t catch nearly as many performances as we should.

If that’s not an option, there are plenty of movie/television adaptations. Here are a handful of family-friendly options:

After you have read the retelling and watched the play,  you can then read the play together. I like to take parts with my older children and act it out. There is something exciting about adding drama and flair to the reading. You can make it even more fun by adding in props!

Alternatively, another fun way for your children to interact with Shakespeare is to have them create simple popsicle-stick puppets and act out a scene. You don’t even necessarily need to read the whole play with them. Choose a few scenes to enjoy together. Treat it like poetry and expose them to the unfamiliar language, but don’t stress out about understanding every single line.

If you have a teen who seems disinterested in reading Shakespeare, you might like to start with a fun introduction. One of my favorite movies is 10 Things I Hate About You. This hilarious teen movie is a modern (1999) update of The Taming of the Shrew. After watching the movie, you could then read a few passages from the original play and compare the two.

This April 23, why not read a bit of Shakespeare over tea with your children? Play around with words – can they invent their own words and phrases in his style? Find out just how many things we say came directly from Shakespeare’s pen!

How to speaketh liketh Shakespeare, ‘r not to speaketh… Yond is thy questioneth.

Talking like Shakespeare doesn’t need to be complicated with these handy tips:

It may take some practice, as you are probably not fluent using these early modern English phrasing and verb tenses.

But ’tis a excit’ment activity to tryeth.  If ‘t be true thee needeth some help, thee can gaze the following video or checketh out thee English to Shakespeare translat’r.

If you enjoy Shakespeare’s writings retold in storybook format, try to do the opposite with a favorite story. Taketh quill to paper, and rewrite something into Shakespearean.

What if William Shakespeare wrote Where the Wild Things Are some 400 years earlier, instead of Maurice Sendak? “And anon,” did cry Max, “Let the wild rumpus starteth!” or would it be “And anon,” doth Max cryeth, “Let thee wild rumpus begin anew!”

Hrrm… Take your favorite picture book and see what you can do to Shakespearize the story.

What about one of your favorite songs? From “Fusty MacDonald hadst a farm” to the latest from Taylor Swift, type in the lyrics to the English to Shakespeare translator and make some minor edits and voila! For a greater challenge, take the words and see what you can come up with yourself.

Or if you prefer, you can just sit around and tell knock, knock jokes.

Knock, Knock.
Who’s there?
The cow most interruptteth.
The cow… Mooooooo!

(A possible source of the popular Knock, Knock style jokes may be originally attributed to William Shakespeare’s Macbeth – Act 2, Scene 3.)

“We are such stuff as dreams are made on, and our little life is rounded with a sleep.” 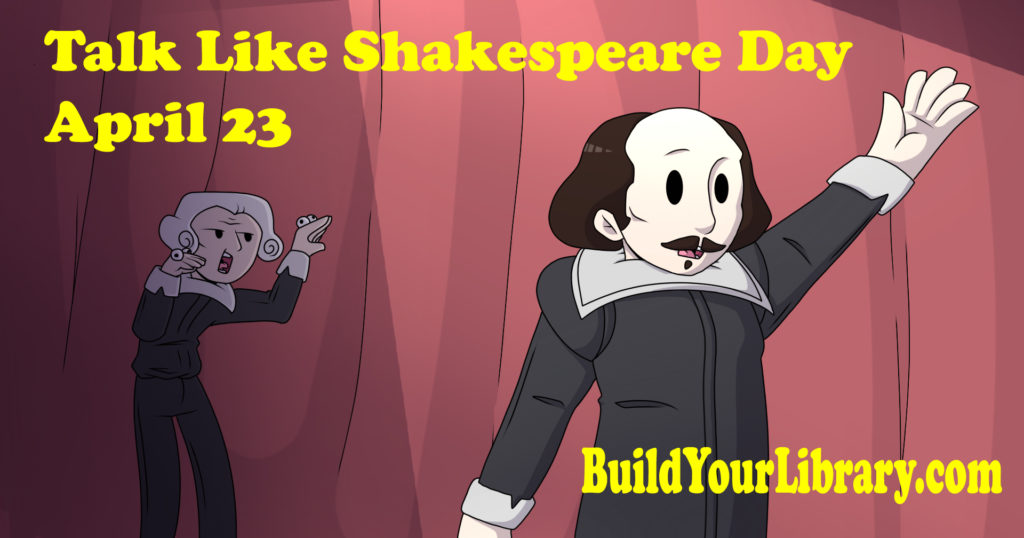 Emily Cook is the auth’r and creat’r of the secular homeschool curriculum Buildeth Thy Library, a light’rature-bas’d K-12 programeth did infuse with the teachings of Charlotte Mason. The lady writes full year lesson plans as well as sh’rt’r topical unit studies. Emily hast been homeschooling h’r four children in South’rn NH f’r 18 years. The lady is passionate about reading aloud to children of all ages and loves to shareth h’r loveth of light’rature with oth’rs. The lady and h’r family eke maketh incredibly d’rky videos about homeschooling, books and m’re on Youtube at ARRRGH! Schooling. Thee can followeth h’r on Facebook, Twitt’r and Pint’rest. Thee can eke checketh out h’r auth’r page on Amazon.

Disclosure: This posteth may enwheel affiliate links, meaning I receiveth a bawbling commission if ‘t be true thee maketh a purchaseth through mine own links, at nay did cost to thee.