Is it time for NaNoWriMo again?

Is it time for NaNoWriMo again? 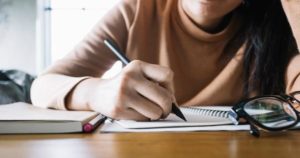 If you encounter a writer in the wild during the month of November, please approach with caution. They are probably participating in NaNoWriMo (at least they should be) and may attack if provoked.

National Novel Writing Month (NaNoWriMo or nano for short) is a yearly write-a-thon that challenges aspiring writers from all over the world to write a complete 50,000 word manuscript in just 30 days. It is not for the faint of heart, and even some of the most gifted of writers still find themselves unable to complete the full 50k. But it’s a challenge that few writers can pass up…

Are you planning on taking the dare? Can you write a full length novel in only a month?

Personally, I am a NaNoWriMo failure. I’ve been attempting it since I was a kid and have successfully failed every time. But because I’m too obsessive for my own good, I give it a try almost every year anyway. It really isn’t about “winning” so much as writing as much as possible and being a part of a community of writers who are doing the same.

Here are some of my best tips and advice for participating:

Every writer has their own different planning methods: the most popular trio being plotters, pantsers, and plantsers.

Plotters prefer writing extensive outlines of their project, and probably write character sheets and draw their own maps for worldbuilding.

Pantsers do the complete opposite – they have a general idea of what they want to write and then just go for it. The name pantser comes from the saying “flying by the seat of your pants.” Pantsers go wherever the story takes them, often with no ending in mind. It’s more about the journey than the destination.

Plantsers are a combination of the two, who do a mix of outlining and freewriting wherever they see fit. Plotting can be too rigid, and pantsing too spontaneous. Plantsing is the happy medium of the two.

Starting with a very basic outline might be the easiest way to go. You can change things up as you get to them, but having a basic ‘beginning’, ‘middle’, and ‘end’ will make the writing process a whole lot easier.

Ask yourself, who is your main character? What do they want? What is keeping them from getting it?  How will they try to get it? Will they succeed? There you go, a basic plot structure. You can go full plotter and start outlining each chapter individually, or start to pants and run from there.

Just like there’s no one way to plan out one’s book, there’s no one way to create a writing routine. Think to yourself, what time of day is your brain the most active? Is it early in the morning, before the sun has risen? Is it past midnight, when you’re supposed to be sleeping but are awake and playing video games instead? Find the time of day that works best for you and make that your designating “writing time”.

Try to write for at least one hour every day. It doesn’t have to be a full one hour period – maybe you’ll write for half an hour before breakfast, and then another half an hour after lunch. Keep in mind that some days you may end up too busy to write. That’s perfectly okay! You have a life. That’s a good thing. If you know that you’re going to be really busy say, on Saturday, perhaps you’ll write for an extra hour on Friday to make up for it.

Sometimes a change in scenery is helpful when you have writer’s block! If you do all of your writing at your desk, maybe switch things up one day and move to the kitchen table. Or the backyard. Or under the bed. If you do all of your writing on your laptop, try writing a chapter in a notebook (with a pretty purple pen!) Or scribbled on a napkin. Or on the sidewalk with orange chalk.

Listening to music that suits the atmosphere of your project is also really helpful in immersing yourself in the story. Make yourself a Spotify playlist specifically for your book – though don’t spend so much time obsessively curating the music that you forget that you’re supposed to actually write too…

It’s easy to plan a book. It can be easy to put together the perfect, most fool-proof writing routine.

Sometimes the writer’s block can get so bad that you think…eh. I just won’t write today. And that’s okay, sometimes you just need a break! But then you might think the next day, nah. I won’t write today either. And then suddenly you’ve entered the terrible cycle of never actually writing your book.

There are two possible solutions to this horrible predicament.

Solution #1 – get a writing buddy! If you and a friend (or sibling, that is also your friend) are both doing NaNoWriMo, you can attack them (with kindness!) if they forget to write. Just, scream at them until they’ve at least written a sentence. Plus, if you’re both writing together, you can bounce ideas off of each other and turn it into a fun bonding activity!

Solution #2 – Hire a ferocious animal to eat you in the night if you skip a day of writing.

Okay… maybe don’t do solution #2. But really, find yourself a person and have them hold you personally accountable. It doesn’t matter if your writing is good or not, this is a first draft. Not a literary masterpiece. You can revise for the next century after nano, but you can’t do that without an abominable first draft!

Then, write some more.

Stripped down, NaNoWriMo is really just a great excuse to write, with a built in deadline. This is a quantity exercise, and forces you to start, work on and finish a piece of writing in just one month’s time. You can edit in and revise the quality later. If you have trouble starting a writing project or struggle to efficiently complete one, this condensed project may just be the thing to help you develop the whole picture process of writing a novel. Or at least a short story.

You never know. You might end up following in Erin Morgenstern’s footsteps and write a best selling novel like The Night Circus, written during the November 2005 NaNoWriMo. It fact, there are several others who have done the same. Marissa Meyer even wrote 3 first drafts in November 2008’s NaNoWriMo, all of which eventually became best selling books in her now famous The Lunar Chronicles series!

For younger writers, I recommend checking out https://ywp.nanowrimo.org for their Young Writers program!  It’s basically the same thing as the main event, but the final word count and stress level is lower. Additional resources are also provided like workbooks for story-planning and daily writing prompts to keep the story going if you get stuck!