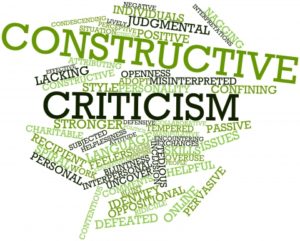 Let’s start off with the basics. What is a critique? “Constructive criticism is the process of offering valid and well-reasoned opinions about the work of others, usually involving both positive and negative comments, in a friendly manner rather than an oppositional one.”

To be perfectly honest, few writers really enjoy having their work criticized. In fact, it can be a super terrifying thing. Can you imagine sitting in a room, silently listening to a group of people discuss the strengths and faults of your child? That’s what it feels like.

You can’t handle the truth!

However, critiques are a very necessary thing! It’s good to get outside opinions on your work. Whether it is an essay for school or a novel you hope to one day publish, you’ll need at least one extra pair of eyes to read it over and point out mistakes or flaws that you may have completely missed.

You are your own worst critic. If you keep all your writing to yourself, eventually you’ll find yourself drowning in flaws that maybe don’t even exist! I’ve done this many times in the past, where I sat on a story for so long and refused to let anybody look at it and suddenly I couldn’t stand to look at it myself anymore. It was too awful! The idea of other people reading this terrible piece of writing was enough to make me feel ill.

But something important to understand is that critiques aren’t just for harsh criticism, but also for highlighting the positives of your writing and offering advice or new ideas to make it even better!

When critiquing your children’s writing, it’s important to understand that they are beginners. This is not a college classroom, nor a professional setting. While it’s good to try and prepare them for the “real world,” you’re using your role as parent and mentor to help guide them to improve their craft! To motivate, to encourage their creative endeavors! Not to make things unnecessarily stressful.

One easy critique method is known as the “critique sandwich.” First, you open the critique with a positive. What did you love about the piece? Where were its strengths? Next, follow it with your criticism. Where was the piece weak? What could have been done better? Conclude on a positive note – offer advice for what you think would improve upon it. Even if the piece wasn’t great, it certainly wasn’t terrible. (At least I hope it wasn’t…) Every story has the potential to become better! Using this method, you are able to present your full opinions on the piece without being overly harsh or aggressive.

When critiquing the writing of your child, have a focus point. If it is an essay or research report, the most important part is the information. Is it accurate? Is there anything that requires elaboration? Does it stay on topic, or meander? If it is a story, the most important part is the plot and/or characters. Is the story easy to follow? Why or why not? Who are the characters, and why should we care about them? Do they have clear motives? Grammar and spelling are also important, but sometimes can be overlooked in the beginning stages of a piece.

A critique is not the same as a book review!

Reviews are for the readers to share their thoughts on a written work for other readers to consume. The author doesn’t (or at least shouldn’t) read their reviews. In a review you can say whatever you want. If you hated the book, you can be as brutal as your heart desires. However, when you are critiquing, you are speaking directly to the author of the piece. Would you really tell someone to their face “your writing sucks”? Probably not.

When I first participated in critiques, it was a bit daunting. Sometimes the other students submitted genuinely amazing stories. What was I supposed to say? How on earth could I critique this?!

But if a work is submitted for critique, you can’t say “this is perfect, don’t change it!” That’s not really fair to the writer either. All good pieces have the potential to become better! Think more deeply about the piece – was there a message they were trying to get across? Was the message clear? Is the story written in the first person? Would the story change for better or for worse if it were rewritten in the third person? Do we need the perspective of this character, or would the perspective of another character be more useful? Is this scene necessary? What if we added a new scene here, to add depth to this character’s backstory?

When I was younger and first starting out writing, I had no real concept of criticism because nobody besides my family was reading my work. It wasn’t until I grew older and started thinking about a potential future as an author that I started growing more self conscious about my writing. How was I to know if I was really a talented writer, or if everybody was just being really nice to me?

Join a club, they said.

If possible, maybe your child can join a writing club for kids around their age. It can be a little less daunting to share their work with peers who are on the same level as they are. Even in college, sometimes it’s good to show an unfinished piece to a friend outside of the classroom. This isn’t a formal critique, and sometimes all you’re looking for is a little encouragement that what you’ve got so far is good and you should keep going!

If there aren’t any physical clubs, there are probably ways online for your child to interact with other young writers. The NaNoWriMo forums are a great place for that.

Something we did in my Intro to Fiction class last year was write critique letters that we emailed or handed to the writer post-critique. In them, we could articulate our thoughts a little bit better than we did during the verbal critique. If you have more than one child, or if you’ve formed a writing club, perhaps you can let them practice writing critique letters to each other!

When I was younger I was active on a kids website called DIY.org where I would sometimes share my writing there with some of my online friends. At one point I was trying to write a pretty cringey Vocaloid fanfic, and would also occasionally post snippets of unfinished novels and short stories I had brewing. It was really interesting to get actual feedback from fellow young writers! They were pointing out mistakes and things I would have never thought to notice.

It wasn’t until I attended a pre-college summer program that I experienced my very first “real” critique session. It was a one-on-one session with one of the school’s creative writing teachers and was honestly pretty intimidating. He read four different pieces of writing (a couple of which I wasn’t particularly proud of…) and ran through them and offered his thoughts on each. He had printed them all out and wrote notes all over them for me to look over as he spoke. This wasn’t a friend, this wasn’t a parent, this was an actual professional writer critiquing my work! I was… terrified.

I’d like to say something profound about the experience, say that it changed me not just as a writer but as a person… but to be honest I don’t remember hardly anything about it. The fifteen minute session came and went very fast. All I can really say, is that its never as scary as you make it out to be in your head. I can recall walking out of that session feeling a bit better about myself as a writer, and with a strong desire to write more more more.

Critique the work, not the person.

Some advice for those having their work critiqued, or have yet to experience a critique session – don’t take anything personally. The intention of a critique is to help improve your craft, not make you feel bad about your skills. You are under no obligation to follow any of the suggestions that you are given. But also, take the advice! You never know what might end up really benefiting your work in the long run.

Critique sessions will never be my favorite thing. They are very scary and sometimes I don’t like what people have to say. But they’re a necessary evil and really are super helpful!

I wish you all the best in all of your critiquing and/or being critiqued endeavors. Happy writing!