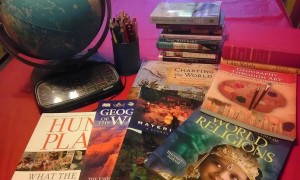 I’ve mentioned a few times now that I’ll be combining my older three children into Level 7 – Exploring Your World, and several people have asked me what I’m adding to it to make it high school level for my oldest. So I thought I’d go ahead and write a blog post to explain how we will be supplementing this program.

One caveat – I tend to over plan. I always have more on the schedule than we’ll ever get to, and that’s OK. As we actually live out the school year and see how things flow, we’ll drop the excess. So, with that being said, here’s what I’ve got planned for my rising 10th grader this year.

The first thing I added for her was the Glencoe World Geography textbook along with Oak Meadow’s syllabus. I already had the textbook (I found it at a used bookstore for $1 a few years ago and thought it might come in handy someday), so I just added in the syllabus to round it out. There are a variety of different assignments and projects to choose from, and she’ll also be able to choose from the project list in the Exploring Your World instructor’s guide as well. Between the two she should have plenty to work with. I think this program would still work at the high school level without the textbook, but since we already had it I decided to try and use it.

That will cover the Social Studies credit. But I also want to make sure we cover the Literature and Composition end of things. Sarah will still be listening in on all of the read alouds, since we do those over lunch. But many of those readers are going to be too easy for her. She’s welcome to read them anyway of course — she’s a voracious reader so having extra books is a good thing — but I’m also adding in some extras to beef it up a bit. I’ll share the book list I’ve created for her below. She doesn’t have to read everything on this list — I plan to let her choose which ones she’ll read. I tried to fit plenty of classics, but also several modern YA books. I’ll also note that I tend to choose books that I think she’ll be particularly interested in reading.

With all of that said, here is her suggested reading list:

North America:
A Walk in the Woods: Rediscovering America on the Appalachian Trail

The Queen of Water

Europe:
How the Irish Saved Civilization: The Untold Story of Ireland’s Heroic Role From the Fall of Rome to the Rise of Medieval Europe

The Zookeeper’s Wife: A War Story

The Importance of Being Earnest

Russia:
The Endless Steppe: Growing Up in Siberia

Between Shades of Gray

Under the Persimmon Tree

The Lemon Tree: An Arab, a Jew, and the Heart of the Middle East

The Ramayana: A Modern Retelling of the Great Indian Epic

Red Scarf Girl: A Memoir of the Cultural Revolution

Snow Flower and the Secret Fan: A Novel

The Street of a Thousand Blossoms

Children of the River

Africa:
A Long Way Gone: Memoirs of a Boy Soldier

The Boy Who Harnessed the Wind: Creating Currents of Electricity and Hope

Australia/Oceania:
In a Sunburned Country

Other:
A Book of Luminous Things: An International Anthology of Poetry

– this is the poetry book Sarah will be reading from this year. She’s read Favorite Poems Old and New several times through, so this will give her something more mature.

The Years of Rice and Salt

– this was recommended in the Oak Meadow syllabus and it sounds fascinating – we’ll likely read this together as a Mother-Daughter book discussion project. It’s revisionist history/fantasy re-imagining the last 700 years – what if the Black Death wiped out 99% of Europe’s population? How would this change history? That’s the question this book seeks to answer.

The Journey of Man: A Genetic Odyssey

– My husband and I saw a documentary by Spencer Wells a few years ago called Human Family Tree about how we all have a common ancestor. I plan on having the kids watch it at the beginning of the school year, and Sarah and I will read this book.

I plan on covering composition by having her write about one book per month. We’ll rotate through the four types of essays:

And that’s it — I’m keeping it pretty simple and flexible. She’ll join us for the read alouds and she’ll complete many of the geography and art projects and mapwork that I’ve already assigned within Exploring Your World and the additional geography reading and assignments PLUS the additional literature and essay writing will make this worth 2 credits.

Sometimes it can be a little trickier to combine when you have older children — I originally had not intended for Sarah to join in with her siblings this year. But she really wanted to take a year to focus on World Geography (something she hasn’t done for a long time) and so I had to find a way to make it work. And in the end, this makes my life that much easier. I only have to teach geography once – I don’t have to do separate lessons. Even my youngest will get in on the fun, as she’s going to be studying Level 0 – Around the World. This is the beauty of homeschooling. Everyone gets to join in with everyone’s lessons and we all get to learn together as a family.

Related Article(s): Can I Combine My Children in One Program?

Emily Cook is the author and creator of the secular homeschool curriculum Build Your Library, a literature-based K-12 program infused with the teachings of Charlotte Mason. She writes full year lesson plans as well as shorter topical unit studies. Emily has been homeschooling her four children in Southern NH for 18 years. She is passionate about reading aloud to children of all ages and loves to share her love of literature with others. She and her family also makes incredibly dorky videos about homeschooling, books and more on Youtube at ARRRGH! Schooling. You can follow her on Facebook, Twitter and Pinterest.