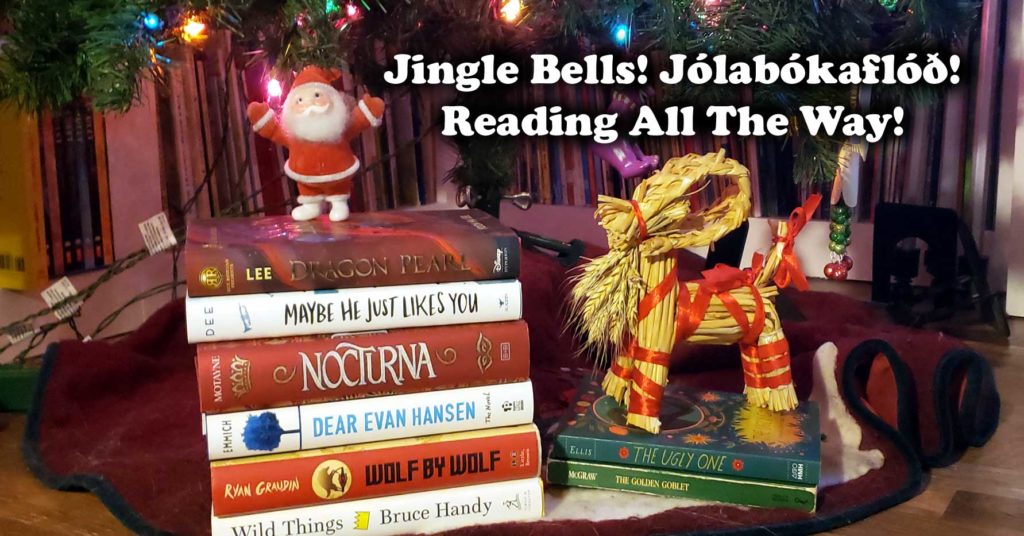 What is Jólabókaflóð, you say?

Jólabókaflóð (pronounced yo-la-bok-a-flot) means “Yule Book Flood”, a popular Christmas tradition from Iceland in which books are exchanged as gifts on Christmas Eve. The tradition originated during World War II when Iceland was under financial struggle and foreign imports were restricted. So there were very limited options when it came to present shopping. Paper happened to be very cheap, so books became the most popular gift. During the Christmas season, Icelandic publishing houses would print books in large quantities.

Even today, Iceland’s publishing industry is fueled by Christmas. The Christmas season officially begins when bókatíðindi, a catalog of all the newest books, is sent to every home. It’s a huge part of Icelandic culture, everyone shares a mutual love of reading and recommending their favorites through the act of gift giving!

Did you know? Iceland is the 3rd most literate country in the world! Finland and Norway are the 1st and 2nd! To round out the Scandinavian area, Denmark is 4th and Sweden is 5th… After Switzerland at 6th, the United States finally ranks 7th.

While Jólabókaflóð is an Icelandic tradition, anyone can celebrate!

Start a new tradition on Christmas Eve, where everyone gets to unwrap a brand new book to read before bed. Make hot chocolate or tea, dress up in your coziest pajamas, play quiet Christmas music in the background, and spend the evening reading as a family! (Sounds pretty hygge to me!)

If your children are older, you can host a bookish secret Santa. Have everyone put their names in a hat, and then whichever name each person draws is the person they have to buy a new book for! One of the most wonderful things about Jólabókaflóð is how it brings family and friends together through a mutual love of reading. Is there any gift more precious or personal than the gift of a favorite book?

For another fun Scandinavian tradition, you could get a Yule Goat! The Yule goat goes by many names depending on where you are – in Sweden it is the julbock, in Norway julebukk, and in Finland they call it olkipukki! But no matter what you call it, the Yule goat is just as beloved a Christmas symbol as Santa Claus or Rudolph!

While the exact origins of the Yule goat are unclear, it is believed that it comes from Pagan lore. Thor, Nordic god of thunder, was often depicted as riding in a chariot across the sky pulled by two goats called Tanngrisnir and Tanngnjóstr. The traditional Yule goat is made of straw or some sort of grain. It was believed that the last sheaf of grain bundled at the harvest had magical properties. These bundles were formed into the shape of goats and used during Yule celebrations!

You can place your Yule goat under the tree on Christmas Eve, and it will guard all the presents (and books) until Christmas morning arrives!

Here are some of 2021’s best books to give as holiday presents this year!

Eyes that Kiss in the Corners by Joanna Ho

In the style of the well-beloved Hair Love, follow a young Asian girl learning to love her Asian-shaped eyes and discovering a path to self-love through beautiful lyrical writing and stunning illustration.

This delightful picture book, from the Newbery Honor-winning author of Genesis Begins Again, highlights the life of the extraordinary Black author Zora Neale Hurston – from her childhood to how she changed the face of literature forever.  Her’s is a story that will inspire young readers “to jump at de sun” and pursue their own dreams.

Too Crowded: A Funny Fish-Tale About Friendship and the Importance of Sharing by Lena Podesta

When Gil the Fish feels crowded in his own tiny fishbowl, he decides to leave in search of open space. But though the outside world is exciting, many dangers lurk too! Will he find a place that’s right for him, and maybe a new friend along the way?

The only place that Ellie truly feels free to be herself is in the swimming pool. She can stretch out like a starfish and experience being truly weightless. Everywhere else in life, she has to put up with bullying and criticism about her weight. But with the help of those who love her for who she is, Ellie learns to love herself too.

A Place to Hang the Moon by Kate Albus

When the grandmother who raised them suddenly dies, siblings William, Edmund, and Anna are in dire need of a place to call home in the midst of World War II. When they learn of the mass evacuation of children from London to the countryside, it seems like the best possible plan of action. But will they really be able to find a forever home this way?

While I Was Away by Waka T. Brown

This heartfelt middle grade memoir follows 12-year-old Waka. When her parents send her to live with her strict grandmother in Japan to become better fluent in Japanese. Once a straight-A student, Waka is now seen as a dumb foreigner. Where in the world does she truly belong?

When the World was Ours by Liz Kessler

Inspired by a true story, this novel follows the lives of three best friends – Leo, Elsa, and Max – who spend one perfect day together in Vienna before World War II rips them apart. Will they ever find their way back to each other, or will their bonds shatter forever?

In a world where the dead do not rest, Artemesia is training to be a Gray Sister –  tasked with cleansing the bodies of corpses so they will peacefully pass on. But when her convent is attacked, Artemisia is forced to awaken an ancient spirit that possesses her body. But though the spirit, called a Revenant, is highly dangerous and unpredictable, it also may be the only one who can help her when dark magic threatens to destroy everything.

The Gilded Ones by Namina Forna

After her blood runs gold during her village’s blood ceremony, 16-year-old Deka is deemed unclean and is sent to face a fate worse than death. But when a mysterious woman comes to her and offers her an alternative choice, to join an army of girls with similar powers who fight the terrible creatures attacking the empire, she is quick to accept this new fate. But she soon realizes that nothing is exactly as it seems. Dark secrets threaten to challenge everything she thought she knew about herself and the world around her.

For more than a decade, Lynnette has been a part of a support group with other “final girls” who survived horrific massacres. But when the members start to disappear, suddenly it seems that someone has found out about their support group. All of their lives are once more at stake. But if there’s anything a final girl knows best, it’s to never ever give up without a fight.

The Dictionary of Lost Words by Pip Williams

Set during the women’s suffrage movement, this is the story of Esme, the daughter of one of the creators of the first Oxford English Dictionary. One day she discovers a discarded word – “bondmaid”, meaning “slave girl”. From that day forward, Esme is determined to create her very own Dictionary of Lost Words. This leads her on a journey exploring the hidden worlds of women and other people that went unrecorded in the history books written by men.

The Woman They Could Not Silence: One Woman, Her Incredible Fight for Freedom, and the Men Who Tried to Make Her Disappear by Kate Moore

In this powerful work of non-fiction, follow the story of Elizabeth Packard. Her husband was so threatened by her intellect that he had her committed to an insane asylum. Elizabeth soon finds she is not the only sane woman committed to Illinois State Hospital, but rather there are many women that had been sent there merely to be silenced. With nothing more to lose, thus begins Elizabeth’s fight to get her voice heard. This in turn led to a huge leap in the human rights movement.

Disclosure: This post contains affiliate links, meaning I get a small commission if you make a purchase through my links, at no cost to you.