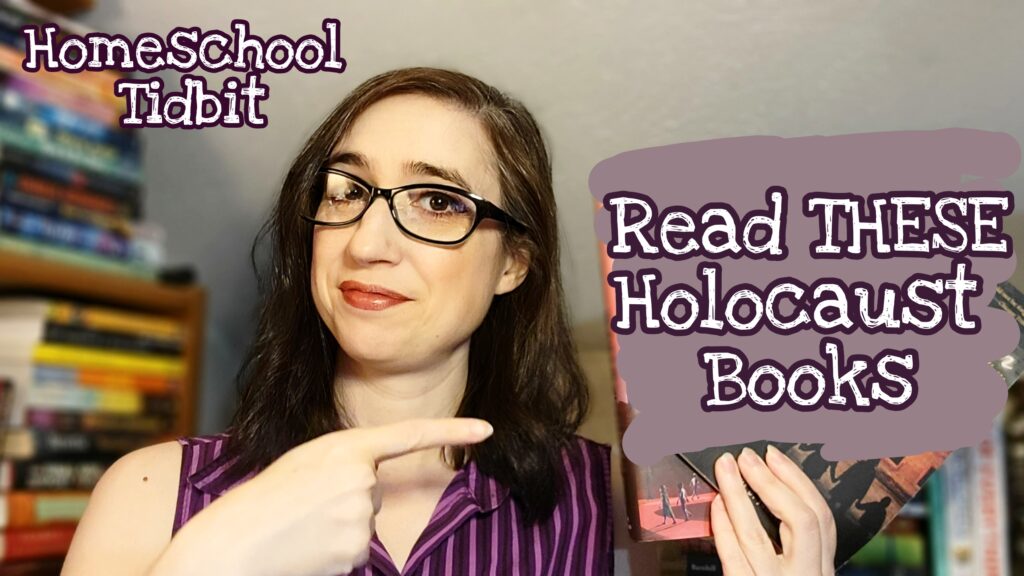 Welcome to Build Your Library’s Homeschool Tidbits: Episode 22 – Teaching the Holocaust – 5 Book Recommendations. In this weekly video series, I will delve briefly into a topic related to homeschooling and will share some of my knowledge and expertise as a long-time homeschooling mother of 4 children. Three of whom have graduated high school and one that is a new college graduate!

I have literally spent the last 30 years reading and researching the Holocaust. As a Jew, we are taught about it from a very young age. It was such a pivotal period in Jewish history, pretty much every single Jew alive today has family who was affected by Holocaust in some way. When I was 12, I began a deep dive into the subject after seeing a movie about it at a family friend’s home. Since then I’ve read and watched numerous things on the subject matter, always looking for new information and perspectives.

I think it is important to teach our children difficult topics in history. We need to not be afraid of the hard stuff. It’s better to slowly delve into accurate history than to paint a pretty picture when they are young and then tear it apart when they are old enough to handle it. Particularly with the Holocaust, it is important that we do not forget. The best way to do that is through education.

As a side note, I will absolutely be writing a full BYL Holocaust Unit Study at some point. I believe the only thing holding it back is the challenge of paring down all of the material I could possibly add, down to just the best resources without it being 36 weeks long! Perhaps this article will be a springboard for downsizing my vast list of potential books.

In the meantime, I’m going to share 5 books to read with your kids, as well as one book to avoid.

Let’s just get the book to avoid out of the way first. Now, you know that I’m a huge advocate for reading and I do not buy into all the twaddle nonsense. So it’s rare for me to call a book bad. So, trust me when I say this is a book to avoid.

If you want to study the Holocaust with your children, do not read The Boy in the Striped Pajamas (no affiliate link). This book has done such a disservice to Holocaust education. I could go on at great length as to why you should not use this book in your studies, but I’ll try to keep it brief.

Second, the book is written to make you sympathize with the Nazis, rather than the Jews, who are used merely as props. This perpetuates a myth that German citizens, even families of high-ranking Nazis (the main character is a German boy whose father works at Auschwitz), were unaware of what was happening to Jews. This is just not true. German children, most certainly the children of Nazis, were taught in school to hate Jews and blame them for the country’s problems. And the Hitler Youth program, which they were forced to join also perpetuated this.

Overall, the book is a mess, but it is sadly used in schools all over the country in the US and UK to teach about the Holocaust. Sure, it’s fiction. But when you choose to write about a very real genocide, you need to take the responsibility to get the facts correct. Just about every time I’ve ever seen anyone on an internet forum ask for recommendations about the Holocaust, this is the most recommended book. But not here. I’m going to offer you much better options today. So, instead of that book, here are five better books to help teach your children about the Holocaust.

For younger children, I recommend Benno and the Night of Broken Glass by Meg Wiviott. What I like about this book is that it centers a cat, Benno, who was a witness to Kristallnacht, or the Night of Broken Glass. This was a pogrom or organized massacre of an ethnic group, in this case Jews. Benno is a stray cat who lives in Berlin and visits a variety of households both Germans and Jews. He witnesses as the city goes from a happy place to live to a dark and frightening place.

This is a good introduction because it shows the changes that happened in Germany right before the Holocaust began. Because it’s told from a cat’s perspective, it feels very innocent. Benno is a bystander who sees everything happening but can’t do anything to stop it. The author also includes a helpful list of other children’s books written on the Holocaust if you want more to read on the subject.

We’ll Soon By Home Again by Jessica Bab Bonde, Peter Bergting and Kathryn Renta is a graphic novel appropriate for middle-grade readers (ages 8 – 12). This book offers six survivor testimonies about their experiences as children during the Holocaust. These short first-person stories allow you to see what their lives were like and how they managed to survive. As well as what life for them was like after the war.

Books like these are important because they tell stories about real people. I read this book with my daughter when she was about 8 as her first introduction to the Holocaust.

Beyond Courage: The Untold Story of Jewish Resistance During the Holocaust by Doreen Rappaport is an important book to include in your studies. So many people assume that Jews went like sheep to the slaughter, but that just isn’t true. There was a huge resistance movement full of brave men and women, doing everything they could to sabotage the Nazis.

This book is fantastic as it takes you through the Nuremberg Laws through the entire Holocaust exploring the ways both big and small that Jews resisted what was happening. This book is written for a teen audience but could be read aloud to children ages 10 and up.

When the World Was Ours by Liz Kessler is a work of historical fiction. What I love about this book is that it explores different perspectives and paths during the war. You follow three children as the war unfolds, two that are Jewish and one that is not. Each child’s perspective explores a scenario of what happened to so many children during that time period.

It’s beautifully written, and the author based one of the storylines on her grandfather’s experiences during the war. Technically this is a Young Adult title, but I read it aloud with my daughter when she was 12.

My final recommendation is Requiem: Poems of the Terezin Ghetto by Paul B. Janeczko. This is a collection of poetry that the author based on his extensive research about the Terezin Ghetto. Theresienstadt was a sort of “show camp” that the Nazis used to prove that they were treating Jews humanely. The camp was full of Jewish intellectuals and artists from Prague, and they allowed them to perform music and give lectures.

The reality was that Terezin was just a way station to the gas chambers. The poetry is moving as he explores what life in that time and place was like through fictional characters from different backgrounds.

Teaching about the Holocaust, In General

So much of what is written about the Holocaust romanticizes it by focusing on someone else saving the Jews. Yes, there were people who risked their lives to hide Jews. However, the number of people who did so was very small overall. Yet so much of the literature set during this period would make it seem as though many Germans and other Europeans were rescuing Jews. This is a distortion of history. So yes, read some of those books, but balance them with others.

We want to focus on the experiences of the Jewish people, as well as others who were targeted by the Nazis. Look for survivor testimonies whenever possible.  As with any other historical period, when reading about the Holocaust, it is important to use multiple sources. Be sure to ask your children as you read, who created this source? Why? What biases might they have?

I hope you found this Tidbit helpful! Come back next week for more homeschooling inspiration!

Until then, happy reading!

Disclosure: This list contains affiliate links, meaning I get a small commission if you make a purchase through my links, at no cost to you.