Not to downplay November 8’s importance as the birthday of “Bram” Stoker (1847), but I wanted to dedicate this week as “Neil / Neal Birthday Week!” Two of my favorite authors, both named Neil / Neal, celebrate birthdays this week: Neil Gaiman (November 10, 1960) and Neal Shusterman (November 12, 1962). 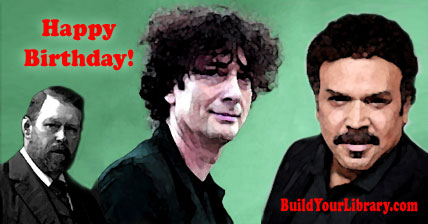 I’m sure everyone has heard of Neil Gaiman at this point – he is probably one of the most famous authors alive today. Gaiman is a prolific writer, not contained to any one medium or genre. My introduction to his writing was Neverwhere, which is a story of a magical underground London. Richard Mayhew is walking through London at night and happens upon a woman in distress. But in helping her, he stumbles onto a world he never knew existed, full of strangeness and danger. The characters were all so interesting and I loved the concept of a world hidden within our own. I had heard of him before, but now I needed to seek out more of his writing!

But my favorite Gaiman book is probably the one he authored with another favorite author, Terry Pratchett: Good Omens. An angel and a demon must work together to thwart the apocalypse to save the world they have grown to love. This is one of those perfect books – it’s hilarious, the characters are stunning and practically leap off the page, and the story itself is fantastic. So much great world-building!

His children’s books are wonderful as well – I adore The Graveyard Book, a story about a little boy left in a graveyard to be raised by ghosts. How did he get there? Where does he really belong? His story unfolds in a riveting and sometimes scary way. This is probably one of the scariest children’s books I’ve ever read!

Some other Neil Gaiman books you might want to check out:

Neal Shusterman is an American author of young adult fiction. His books tend toward soft science fiction – they take place in our world, or one similar, often in the near future, and explore fascinating ideas and concepts!

My first introduction to Neal Shusterman’s writing was Unwind. I found it on a list of “mind-blowing books” and thought the synopsis was intriguing. That book is absolutely a mind-blowing story, and not for the faint of heart! In Unwind, we find ourselves in a near-future America that has just rebuilt after the Heartland Wars. The country was divided, but came to a compromise – abortion is now officially illegal, however, you can opt to have your 12-17-year-old child “unwound,” a process that sees the teen is kept alive, yet taken apart so that their parts can be used to heal others.  This story follows a group of teens who were meant to be unwound but have escaped and gone into hiding. There are four books in this series, but I’ve only read the first 2.

I love Unwind, but my absolute favorite of Shusterman’s work is the Arc of the Scythe trilogy. These three books – Scythe, Thunderhead, and The Toll are a masterpiece. He explores some amazing ideas in this series. The basic synopsis is that we have evolved as a society to where we have overcome death. Human society has reached utopia as we no longer have a need for leaders as the Thunderhead – the now sentient cloud – is able to rule the world with perfect impartiality.

To control the population, we now have Scythes – people trained to kill. The only way to die is for a Scythe to kill you. But that kind of power can corrupt. This series is phenomenal. It has everything from amazingly written characters, a bonkers plot where you have no idea what might happen next and an intricately woven world that feels like an all-too-real possible future. I highly recommend picking it up!

Some of other Neal Shusterman books you might want to check out:

Happy Birthday Neil Gaiman and Neal Shusterman! Do you have a favorite book from either of these authors? Share in the comments!

Disclosure: This post contains an affiliate link. This means I get a small commission if you make a purchase through my links, at no cost to you.

Emily Cook is the author and creator of the secular homeschool curriculum Build Your Library, a literature-based K-12 program infused with the teachings of Charlotte Mason. She writes full-year lesson plans as well as shorter topical unit studies. Emily has been homeschooling her four children in Southern NH for 18 years. She is passionate about reading aloud to children of all ages and loves to share her love of literature with others. She and her family also make incredibly dorky videos about homeschooling, books, and more on Youtube at ARRRGH! Schooling. You can follow her on Facebook, Twitter, and Pinterest.