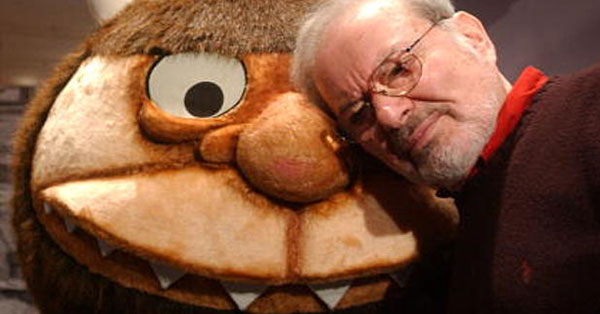 Maurice Sendak is widely considered to be one of the most important children’s book authors and illustrators of the 20th century. And though he died in 2012 at the age of 83, today would be his 94th birthday!

Maurice Sendak was born on June 10, 1928 to Polish-Jewish immigrants and grew up in Brooklyn. He was a mainly self-taught artist, and in his 60-year career illustrated over 100 picture books, many of which he also authored.

Sendak continued to hone his craft at the Art Students League of New York, and some of his earliest works were window displays for a toy store, as well as backgrounds for All-American Comics (one of the forerunners for DC Comics, which ran issues from 1939-1948). The very first picture book he illustrated was Marcel Ayme’s The Wonderful Farm (1951). His older brother, Jack Sendak, also wrote picture books, and Maurice illustrated two of them — The Happy Rain (1956) and Circus Girl (1957).

Sendak was not interested in sugar-coating the darker realities of the world in his creative work. When his parents came to America, they were uneducated and couldn’t speak English. In the 1930s, many of their relatives who hadn’t been able to flee to America had been killed in concentration camps. He was exposed to the concept of mortality at a very young age. Though he did not have a particularly happy childhood, he felt that if he hadn’t then he may have never grown to be the artist he became.

Maurice Sendak stated that three of his most popular written works are meant to be read as a trilogy that depicts childhood and growing up. The first of these is In the Night Kitchen (1970), which is about a young boy experiencing a surreal dream in which he finds himself in a giant’s kitchen and is almost baked into a cake. Within the trilogy, this book represents being a toddler.

The second is Where the Wild Things Are (1963), one of our family’s all-time favorite books. This story is about a boy who dresses up as a wolf and wreaks havoc at home. When he is scolded by his mother for his mischief, he imagines himself running away into the world of the fierce Wild Things. This book represents pre-school.

The final book in the trilogy is Outside Over There (1981), which is about a young girl who must rescue her baby sister who has been stolen away by goblins. This book represents pre-adolescence.

Another personal favorite book of his is The Nutshell Library (1962), which is a collection of four strange, eerily whimsical stories. I’m not sure I’ve ever read the physical version of this book, but these were included in a DVD animated anthology of his work that I watched many times as a child (Where the Wild Things Are and Other Maurice Sendak stories), and sometimes I still find myself thinking about Pierre (the cautionary tale of a young boy who responded to everything with “I don’t care”, and was swallowed whole by a lion.)

One of his most beloved works by far, however, was the Little Bear series, written by Else Holmelund Minarik. The books ran from 1957 to 1968 (with a sixth book released in 2010 with a different illustrator). There was also an animated television adaptation that ran for 5 seasons, from 1995-2003 (and a movie, The Little Bear Movie, in 2001). The stories started out relatively simple, but with each new book grew into a beautiful, vast fictional world with lots of colorful characters who went on many exciting adventures.

Maurice Sendak was married for 50 years to a psychoanalyst named Eugene Glynn. He revealed this in a New York Times article in 2008, one year after Glynn’s death. His parents never knew. When Glynn died, Sendak donated 1 million dollars to the Jewish Board of Family and Children’s Services in his memory.

After his death in 2012, the author Neil Gaiman stated, “he was unique, grumpy, brilliant, wise, magical and made the world better by creating art in it.”

To honor his life and work, celebrate his birthday today by reading some of his books with your children, or by watching an episode or two of Little Bear!

Disclosure: This post contains affiliate links, meaning I get a small commission if you make a purchase through my links, at no cost to you.